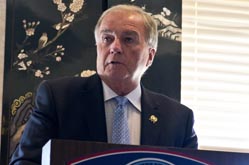 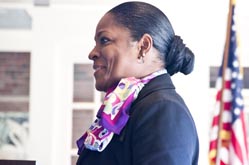 At our September meeting, Dr. Larson (top) briefed the mayors on the state of the college. “Ocean County College is doing well,” he said, noting that OCC maintains a “substantial reserve.”

Dr. Larson said that while enrollment had fallen by 4% this year, the decline was largely attributable to the overall economy and was not unexpected. No major cutbacks or personnel reductions will result, he said.

Commenting on recent news accounts, Dr. Larson said Keane University had moved to address criticism from the Middle States Commission on Higher Education, which last year cited institutional problems at the university. More recently, he explained, Middle States had credited Keane with the necessary improvements. Keane, based in Union, N.J., has a strategic partnership with OCC and a growing presence on the OCC campus.

Dr. Larsen said the Keane partnership will enable Ocean County students to matriculate after two years at OCC to complete a four-year degree program at Keane at a cost of approximately $27,000, not counting financial aid. Many students now pay that much for a year or even a semester at some U.S. universities, Dr. Larson said. He thanked the Ocean County Freeholders for their ongoing financial support for OCC.

Assemblyman David Wolf (lower left above) spoke briefly asking the mayors to support the $750 million New Jersey State College Bond Issue for buildings and upgrades at the state’s colleges. Some of the money would reportedly be allocated to 19 community colleges.

Sandy Broughton (lower right above), president of the Ocean County College Foundation thanked the Mayors’ Association for their support over the years.

Mayors present $5,000 to the OCC Foundation.