Our Guests in November

OC Mayors’ Association President DiAnne C. Gove of Long Beach Township began the November meeting with a flag salute and a moment of silence in memory of long-time association president, Mayor Dave Siddons of Island Heights who died in October.

Lucy Vandenberg (above), Executive Director of the Council on Affordable Housing (COAH) spoke to a full house at the November meeting. Municipalities across the state are wrestling with state requirements for affordable housing as deadlines for action approach. COAH is an agency within the N.J. Dept. of Community Affairs Vandenberg provided a brief history of affordable housing as a government mandate beginning with the State Supreme Court Mt. Laurel decisions in the 1980s. Local governments must submit affordable housing plans to COAH by December 31, she said, or they could become the targets of builder lawsuits. If successful, those suits could permit high-density housing that might override local zoning restrictions. A second speaker, Michael Cerra (left), Senior Legislative Analyst for the N,J. League of Municipalities, explained the league’s views on housing issues. The league does not disagree with COAH;s goals, he said, but is part of a court challenge to the regulatory specifics meant to meet them. With oral arguments expected in mid-2009, a decision may not be announced until late in the year or early in 2010, he said. 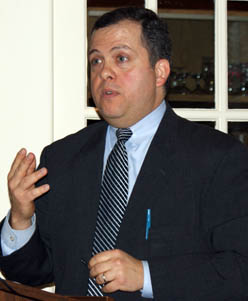