Bill Dressel told a well-attended meeting of the Ocean County Mayors’ Association that state government is asking municipal leaders to “commit political suicide.” The problem, he explained, is a tide of bad fiscal news and poorly conceived state initiatives and decisions. Along with reduced state aid and a state-imposed 2% cap on municipal tax increases, he said, municipalities face a flood of recession-related property tax appeals that are reducing local revenues. The result is stressed budgets and in some cases deep cuts in personnel and services. “They just don’t get it,” Dressel said of state government’s attitude toward local concerns, a phrase echoed from the floor during the Q&A session. Dressel distributed sheets that outline the League’s position on some bills currently before the Legislature. He urged the mayors to communicate with their senators and assembly representatives on these measures and others. He suggested mayors stay current with developments in Trenton by regularly visiting the League’s web site at www.njslom.org. 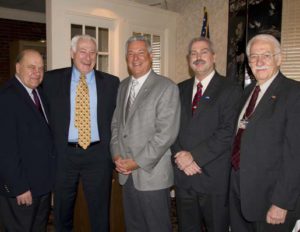