Bob talked about his agency’s policy of customer service. Initially, some in Trenton objected to the word “customer,” he said, because it did not seem appropriate for a regulating agency. Bob noted that the NJDEP did not lower its environmental standards but simply improved the application process. The concept of applicants as “customers” no longer generates the objections it once did, he said.

Nevertheless, he noted, the existing web of environmental regulations is unwieldy and in need of serious reform. Meanwhile, the NJDEP is willing to help by bringing regulators into a room with the applicants to answer questions, seek efficiencies, and when necessary point out that a particular project is simply untenable — all before vast amounts of money have been spent for engineers and lawyers.

In that context, Bob introduced his deputy chief of staff John Gray, who helps facilitate such meetings. John can be reached at 609-292-9954 or [email protected]. 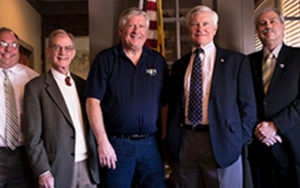