Ørsted North America hopes to build a major power generation wind farm off the New Jersey coast. The company sponsored this event so Kris could brief the mayors on the project. Called Ocean Wind, the project is in its earliest stages, Kris said. The company will be assessing its physical, biological and economic suitability in consultation with the people, organizations, and governments affected. The initial installation would be located on the relatively shallow Atlantic Shelf far enough offshore to be invisible from land. The site beyond New Jersey jurisdiction in U.S. waters is expected to generate enough power to sustain 500,000 New Jersey homes. Kris’s talk quickly evolved into a lively question and answer session with the mayors and guests. 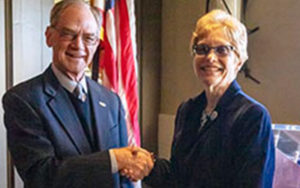 The mayors amended the OCM bylaws to create a new officer, the post of Immediate Past President. That job automatically went to Ocean Gate Mayor Paul Kennedy, OCM’s – you guessed it – immediate past president. Paul had been our second vice president. To fill the post, President Curtis happily appointed Mayor Susan Marshall of Tuckerton.